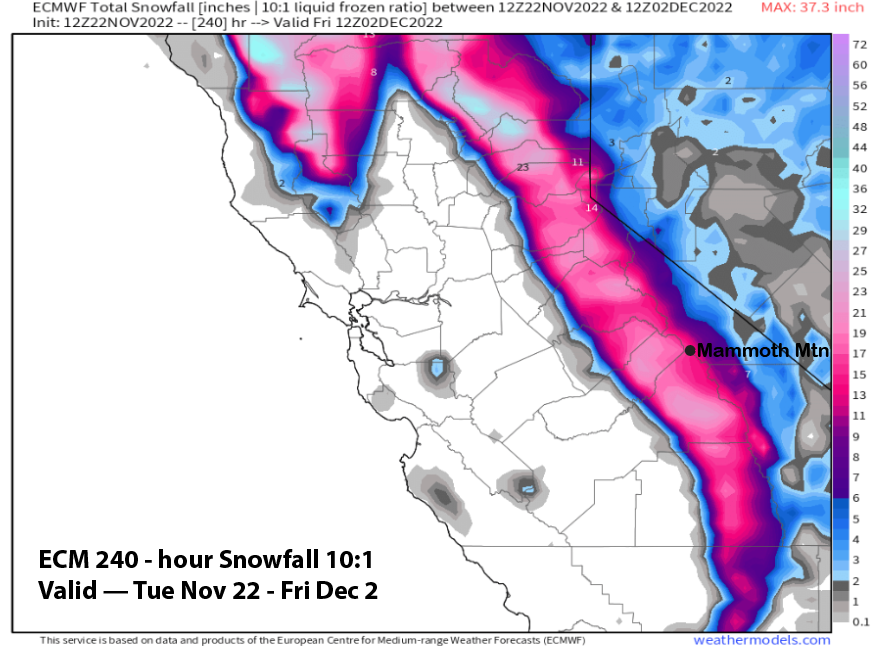 The current infrared satellite image (below) shows high clouds passing through central and northern CA associated with a weak weather system moving through the PacNW.

A ridge of high pressure will then build into the state on Thanksgiving (image below) and then hold in place through most of the holiday weekend, although it will probably start to weaken on Saturday and into Sunday.

Under the strong ridge, temperatures could get unseasonably warm with the GFS model forecasting 700-mb or 10K elevation temps rising to near 4-6°C by Friday.  Thus, temps could get up into the mid/upper 30s up top and low 50s at Main.

A weather system may move through NorCal on Saturday for breezy to gusty winds along with colder temperature into Sunday, but still rather seasonable.

The longer-range guidance is mostly unchanged from the previous update and favors a more substantial pattern change by early next week that will produce a good chance for a powder day (s).

The models are in agreement that a strong upper-level high-latitude type trough will move southward from the Gulf of Alaska/W. Canada area and into California by Monday next week.  The GFS model (image below) is the farthest west with the southward track of the weather system and the QPF (Quantitative Precipitation Forecast) is the largest of the three main model suites (ECM, GFS and Canadian) at about 1.5”+ liquid.

The ECM model (image below) takes the low southward with a slightly farther eastward projection and not as much moisture gets entrained into the system since it has less over-water trajectory.  However, due to the good dynamics, the model QPF from the ECM (image below) is still almost 1” liquid and the Canadian model has about an inch. 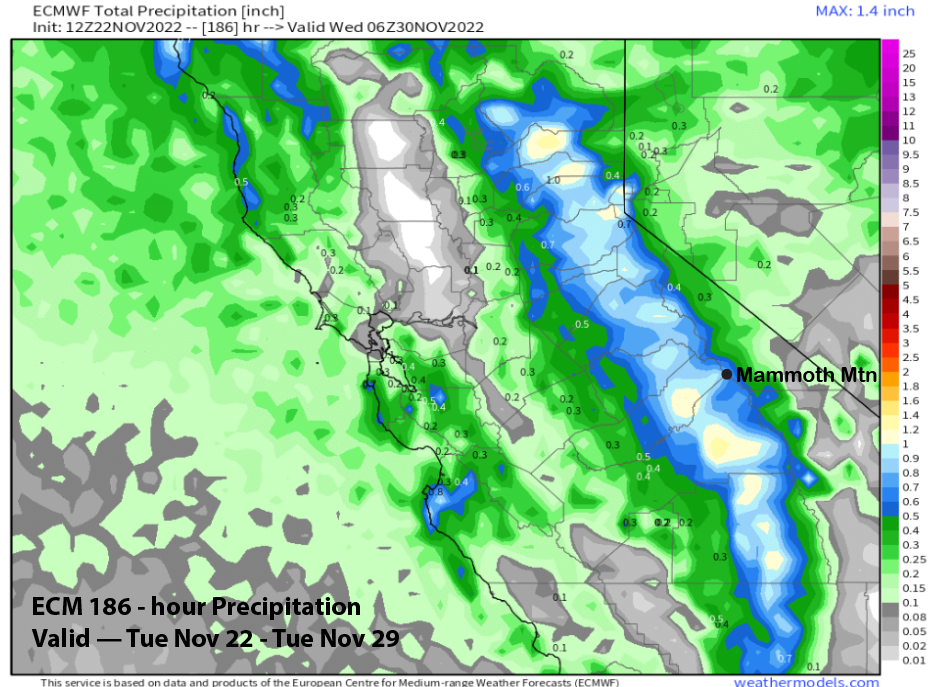 And that makes sense with the upper level pattern showing a deep trough and at least some orographic lift from the Sierra.  With the warm air in place, it won’t be a cold storm with the cold air not really arriving until the snowfall is tapering off.  It looks like most of the snow will fall with snow levels around 5-6000 feet before lowering to below 4000 feet as it ends.

Overall, amounts look to exceed six inches at Main and may end up close to 10” with foot up top a good possibility.  Snowfall starts early Monday with most of the snow falling Monday night resulting in a powder day Tuesday.

It looks like there will be a break on Tuesday and into mid-week before the next potential storm system moves into the state toward the latter part of the week (image below). That could produce another round of snowfall (and powder day) with current timing suggesting Thursday night and/or Friday.  Of course, it is ten days out and those details will probably change.

The fantasy range guidance keeps the long-wave trough in place along the West Coast through the following weekend (image below) and if strong enough southwest flow develops, then there could be a strong storm or maybe an Atmospheric River.  Too far out to know for sure. 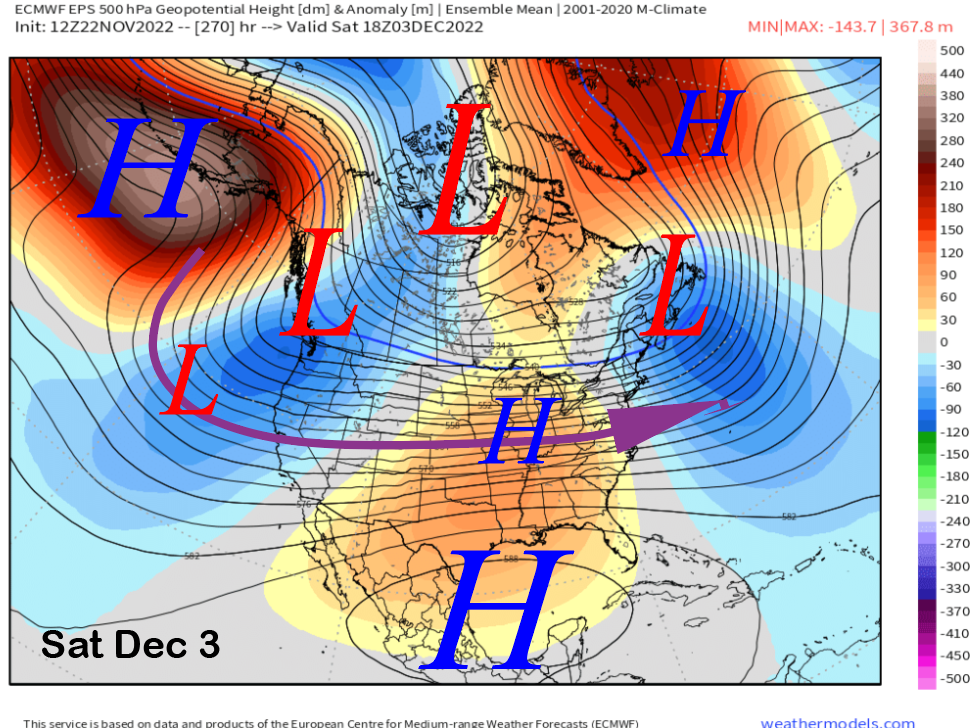 Regardless, the GFS model is showing hefty amounts (image below) through the end of next week at around 3-4” liquid and the ECM EPS is showing a few inches liquid for the period (two images below).  Thus, a few feet or more of snowfall is possible if the cards fall into place starting next week and into early December.  No update Friday, next update on Saturday.  WG 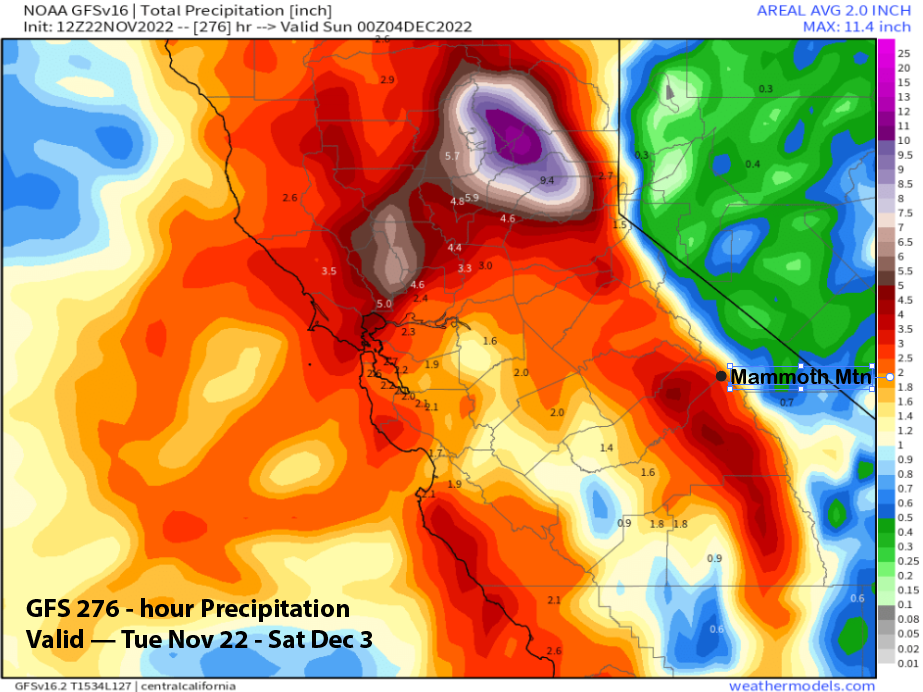 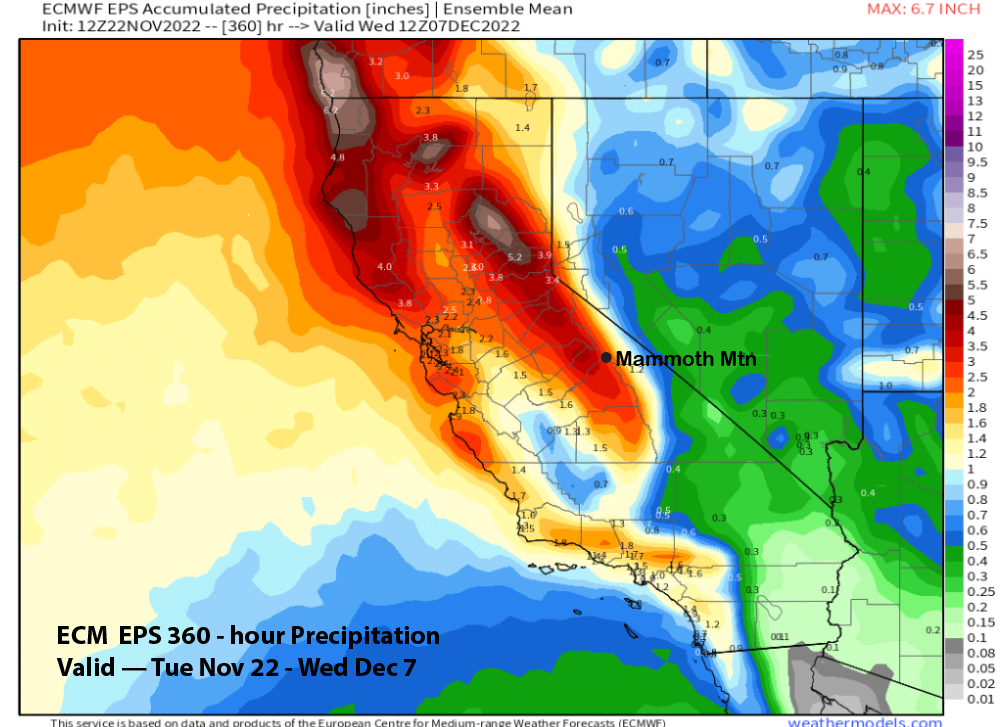