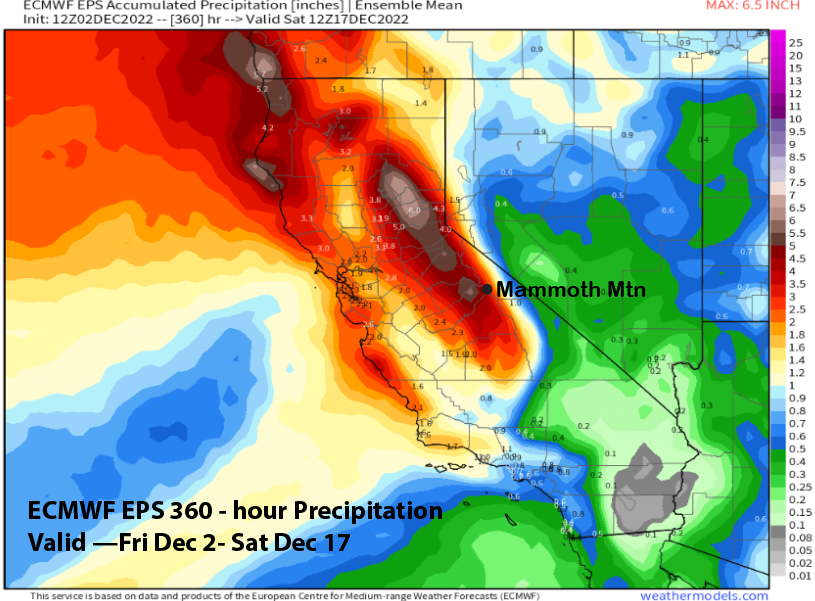 Sat 12/3 – Snowfall increases during the day and becomes moderate to heavy at times during the afternoon and overnight. Accumulations 23 – 27” by Sunday AM.

Sun 12/4 – Snowfall continues during the morning hours before tapering off during the early afternoon and ending. Accumulations 2 – 4” by Monday AM.

Mon 12/5 – Light snowfall is possible during the day, ending Monday night. Accumulations 3 – 4” by Tuesday AM.

The current infrared satellite image (below) shows high pressure centered over Nevada and  subtropical cloudiness streaming into the southern part of the state.  It also shows the next upper-level low pressure system moving southward from the Gulf of Alaska and into the eastern Pacific.

The forecast has changed significantly since the last update and for the better.  Models are now moving that upper-low southward farther off the coast and that is allowing it to entrain more substantial Pacific moisture than the previous track that was closer to the coast.

The upper low is expected to be centered off the CA/OR border by early Sunday (image below) with the southern branch of the jet stream (purple arrow) pointed straight into the Central/Southern Sierra under fairly good southwest flow.

By Saturday afternoon, models are showing a robust precipitable water plume (image below) of around 1.5” of vertically integrated liquid located over the Central CA and lined up with Mammoth under the southwest flow (purple arrow). 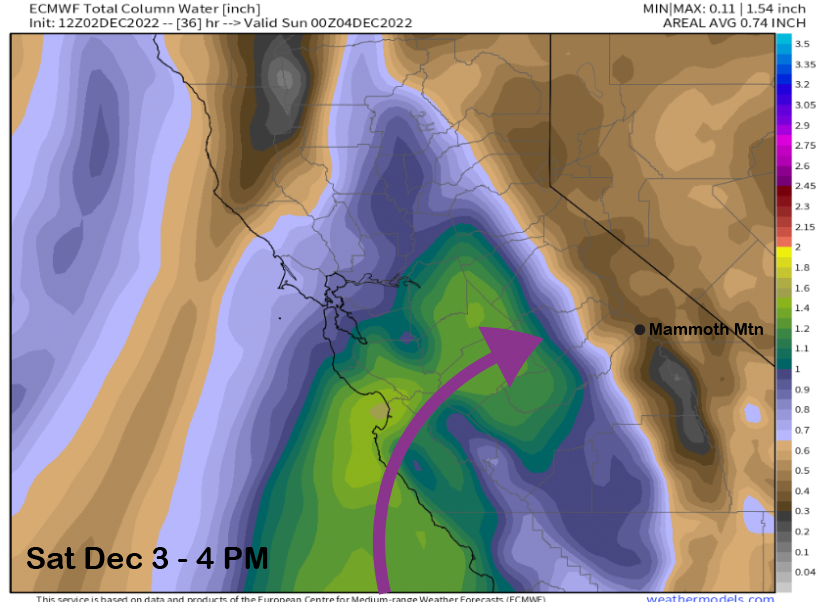 There is actually enough moisture combined with decently strong low and mid-level jet stream winds for the plume to be defined as a weak Atmospheric River (image below- red box).  That weak AR is now forecast to move into Mammoth over the weekend and forecast snowfall totals have increased significantly.

The Canadian model is actually the wettest and has over 5” liquid for the weekend.  The ECM model has about half that amount (image below) while the GFS model is in between the two with about 4” liquid (two images below). 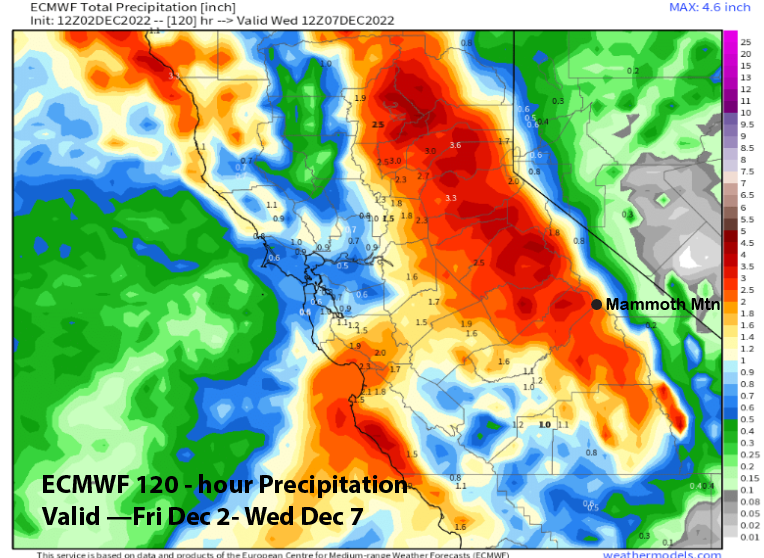 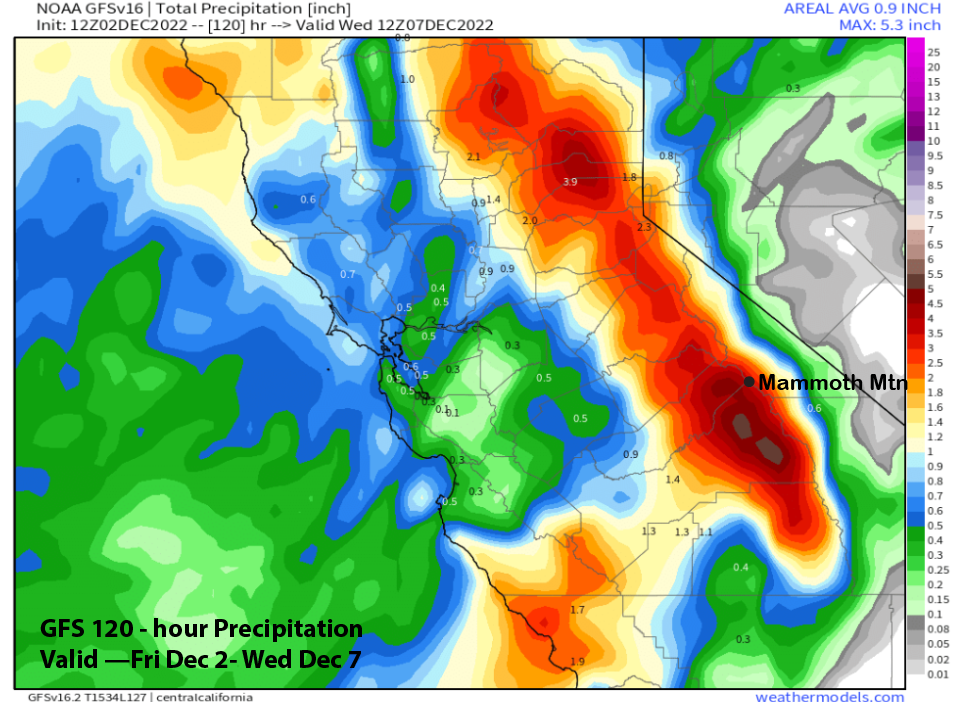 Since it will be a slower moving system and it has an AR, the forecast leans toward the wetter solutions and closer to the GFS.  It will also be base-type snowfall (Sierra cement, although it may start out lighter) with snow levels rising to near 7000 feet by Saturday afternoon and only coming down to around 6-6500 feet by early Sunday.

Regardless, forecast is calling for another two feet at Main and around 3 feet or more up top.  Winds won’t be too strong on Saturday (good storm riding day) with stronger winds forecast for Sunday, primarily during the morning hours, and that could result in a slow opening.

The upper-low will slowly move southward through Tuesday (image below) and another round of mostly light snowfall is expected on Monday. A few more inches of snow are possible and this time under lower snow levels around 5000 feet.  Winds will also be light on Monday, so storm riding should not see many lift holds.

Snowfall ends Monday night and a partly cloudy and seasonably cold day is expected Tuesday with only a chance for flurries. Conditions should be excellent.

The longer-range guidance is mixed about the pattern for the end of next week and beyond after a consensus few dry days around the middle part of next week.

The GFS model (image below) moves a splitting trough into CA around Friday next week.  It doesn’t produce much snowfall with it.  The other models are different with the ECM having a slider that is well supported by the Ensemble Prediction System (EPS) (two images below).  The Canadian keeps the system together better versus the GFS, but has it farther northward into NorCal.

The GFS ensemble favors at least some light snowfall as it has the trough along the coast and not splitting as much as the 12Z operational run (image below). Thus, there could be some snowfall end of next week, but probably not a big storm.

The fantasy range ensembles are then favoring a trough to possibly reform along the West Coast and southward into CA with both the GEFS (image below) and EPS (two images below) similar.  That would allow more storms to move into CA. However, the big worry is the Greenland block (images below- green box) that is forecast to develop over the next few days and remain persistent for possibly the rest of December or longer.

Depending upon exactly where that block sets up, there will be an upstream trough and ridge westward toward the Pacific.  If it is too far eastward or if the Aleutian high builds stronger northward, than the long-wave trough will be in the middle of the US where they will experience an Arctic outbreak.  We will be left high and dry.

Right now the models are favoring the trough to remain far enough westward for us to remain in an active storm pattern through mid-month. Models than favor the trough to move into the middle of the country over the second half of December.  Thus, get your powder days in now as there may be a dry spelling looming in the not-too-distant future. WG