Wed 1/27 – Heavy snowfall and strong winds will result in blizzard conditions during the day and overnight. Accumulations 48 – 54” by Thursday AM and 60”+ up top

Thu 1/28 – Heavy snowfall is expected during the daytime hours along with gusty winds, not as strong as Wednesday, but blizzard conditions possible at times. Snowfall decreases in intensity overnight. Accumulations 26 – 32” by Friday AM and 40”+ up top

Fri 1/29 –Snow showers are expected during the day, primarily AM, before ending Friday night.  Accumulations 2– 4” by Saturday AM and ~6” up top

Sat 1/30 –A chance for flurries or light snow showers during the morning, little or no accumulation is expected.

The infrared satellite image (below) this afternoon shows a very strong storm approaching Northern California associated with a deep upper-level closed low off the Oregon coast.  This is the expected big storm and it will move southward overnight into the Mammoth area with a foot of new snowfall likely by dawn along with increasing winds.

The deep upper low-pressure system (image below) will push a very strong polar jet stream (blue arrow) into California tomorrow along with a powerful cold front.  Winds 60-100 mph and heavy snowfall will create blizzard conditions tomorrow morning and during the day with continued blizzard conditions expected tomorrow night as the front will begin to stall as it enters the southern Sierra.

The upper level low is expected to move southward along the coast on Wednesday night and Thursday (image below) and the westerly jet will veer northward and become southwesterly into the Central Sierra (purple arrow), perfect for moist orographically induced flow up the San Joaquin River drainage into Mammoth.  It will then shift southward by Friday as the upper low continues to shift southward (two images below).

That means the atmospheric river (AR) that is positioned along the front will move into NorCal tonight and then basically stall over the southern part of the Central Sierra and northern part of the Southern Sierra tomorrow night and through Thursday (image below). 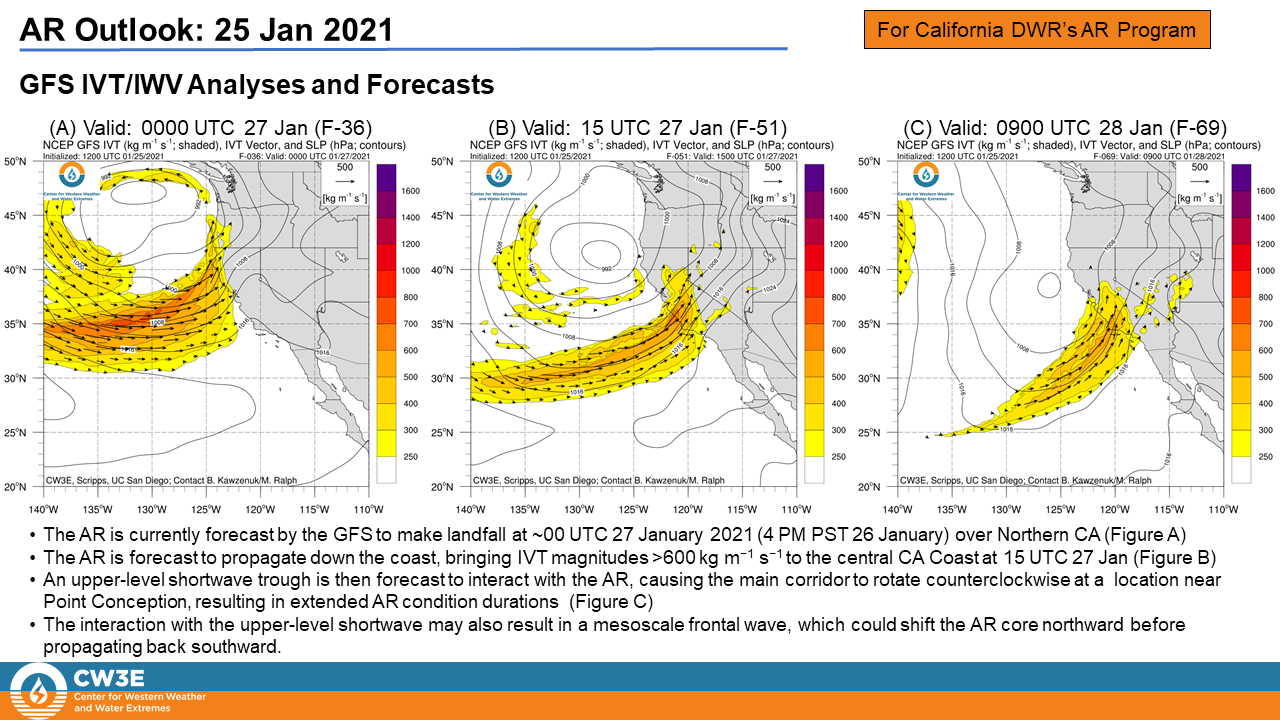 The end result will be about 36 hours of continuous heavy snowfall for Mammoth.  Add in strong winds and it appears that it will be a full-on Sierra blizzard tomorrow and Thursday.  Travel is not recommended and the resort will probably shut down Wednesday, if not Thursday too.

Usually when dealing with ARs associated with strong storm systems, there is often a challenge with snow levels as there is sub-tropical moisture involved.  Not this time due to the cold air in place and plenty of cold air to mix into the AR from the polar jet.  Snow levels will start out low at 3000 feet and then rise to about 4500-5000 feet tomorrow. A further rise to about 5000-5500 feet is possible Thursday before snow levels fall again by Friday. While the snow levels will be low, the snow will have plenty of moisture and will not be fluffy.

Overall, it appears that Mammoth will be in the sweet spot with this major storm event and will probably get the most snow of all the CA resorts.  The 12Z GFS (image below) has the precipitation bulls-eye along the crest just west of Mammoth and about 9” liquid for the event.  The ECM is similar with the bulls-eye in the same spot while the Canadian (image below) is slightly drier.  High-resolution WRF models are showing around 12” liquid for the event and that is certainly possible with the AR hose pointed into Mammoth.

The snowfall forecast is calling for some insane snowfall amounts tonight into Friday for Main Lodge in the 8 foot range.  I would not be surprised if the powder bowls up top get 10 feet and 6 feet falls at Eagle and 5 feet in town.  Looks like Bishop will see some snow too before it changes to rain Wednesday night.

A very weak system will move east through CA in the zonal flow early Saturday (image below) with models washing it out upon landfall.  There could be some flurries or light snow showers Saturday morning, otherwise snowfall ends Friday night with dry weather on Saturday.

The longer-range guidance is still showing one more good chance for good snowfall before the weather turns dry again. However, the models are not in agreement about the exact scenario.

The ECM (image below) and the Canadian models are quite similar and they moves fairly strong upper-level trough through NorCal on Monday and Tuesday with Mammoth on the southern edge of the precipitation and Tahoe northward taking the brunt of the storm.  ECM has about 6-9” of snowfall for the storm that would be fine considering there will be a base now.

The GFS (image below) on the other hand, is farther southward with the trough and develops nice southwest flow ahead of its passage that would generate more orographic snowfall in the Sierra versus the west-northwest flow depicted by the ECM.  That model has about 2” liquid (two images below) for the event.

The consensus is that dry weather will return mid-week next week and likely last through the following weekend as high pressure builds back westward into the West Coast (image below) and the long-wave trough shifts westward as well into the mid-continent.

It looks like the dry weather may last into the second week of February with the GFS ensemble mean (image below) suggesting a system may move through CA out of the North around the 10th.  That solution would only mean very light snowfall at best.  Otherwise, the ECM climate model retrogrades the ridge/trough eastward again around mid-month for the next chance.   The dry period will give the town time to dig out, this storm will be a doozy.  WG