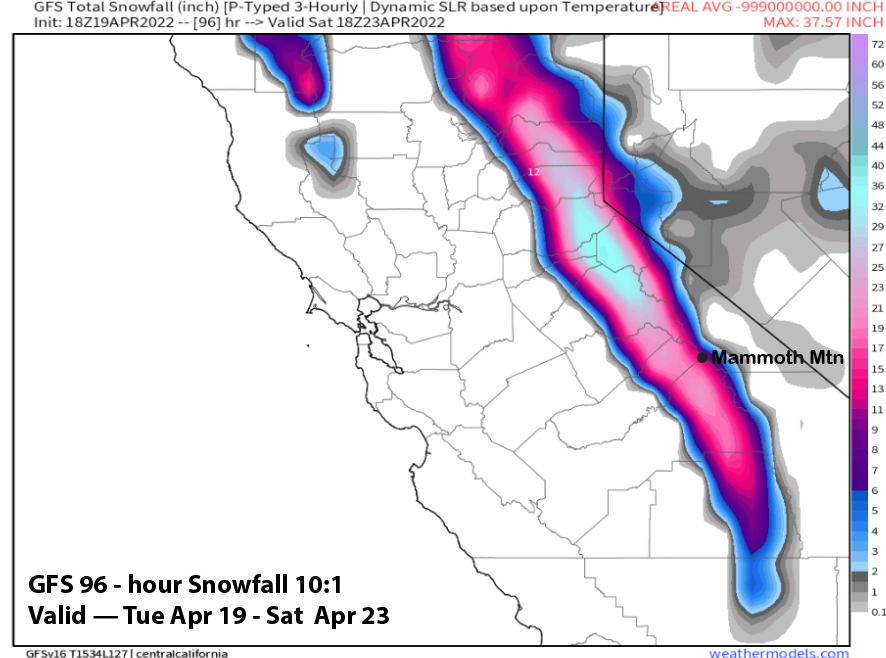 Thu 4/21 – Snow develops during the day and becomes heavy at times during the evening and overnight hours. It will also be very windy. Accumulations 13 – 16” by Friday morning, up to 20” up top.

Fri 4/22 – Snowfall tapers off during the morning and ends late afternoon/evening. Accumulations 2 – 3” by Saturday morning, up to 4” up top.

The infrared satellite image (below) today shows a dissipating cold front moving through the Central Sierra attached to a stationary front that extends eastward into the eastern Pacific.  That is where it links up with a stronger storm forecast for Thursday and into Friday.  As far as the current front, light snowfall will end this afternoon with only a trace accumulation expected.

The models move the strong upper-level trough associated with that storm in the eastern Pacific into CA by early Thursday (image below) with the southern branch of the jet stream (purple arrow) extending southward into the Mammoth area.  This will produce good orographic enhancement of the moisture field along the frontal boundary resulting in periods of moderate to heavy snowfall.

The GFS is the wetter model (image below) showing around 2” liquid for Mammoth with 2.5”-3” liquid west of the Sierra crest.  The ECM isn’t showing as much with a bit more than an inch for Mammoth and 1.5” west of the crest. Due to the strong dynamics associated with the storm, the forecast leans toward the wetter guidance with 2.0 – 2.5” liquid favored for the event. 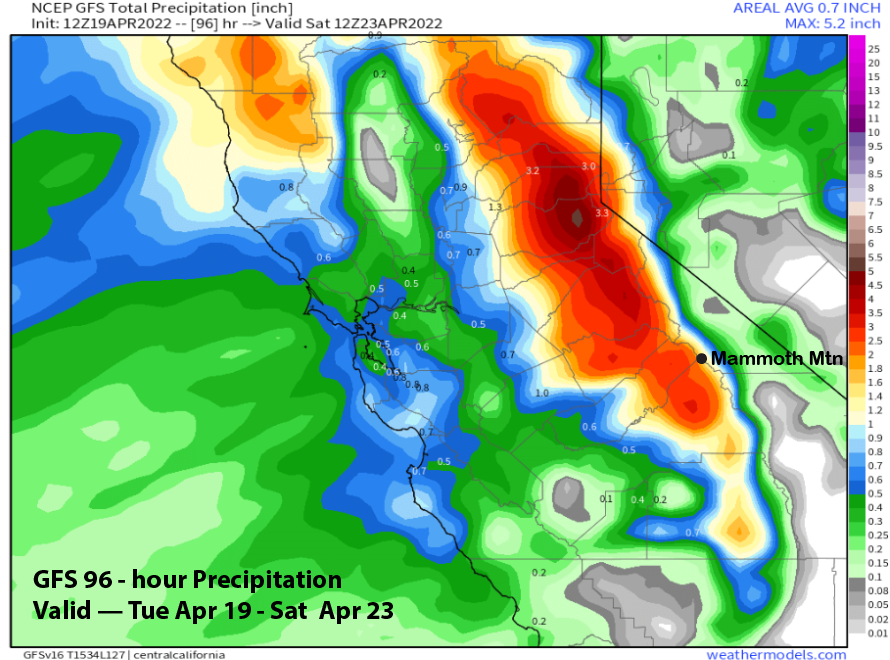 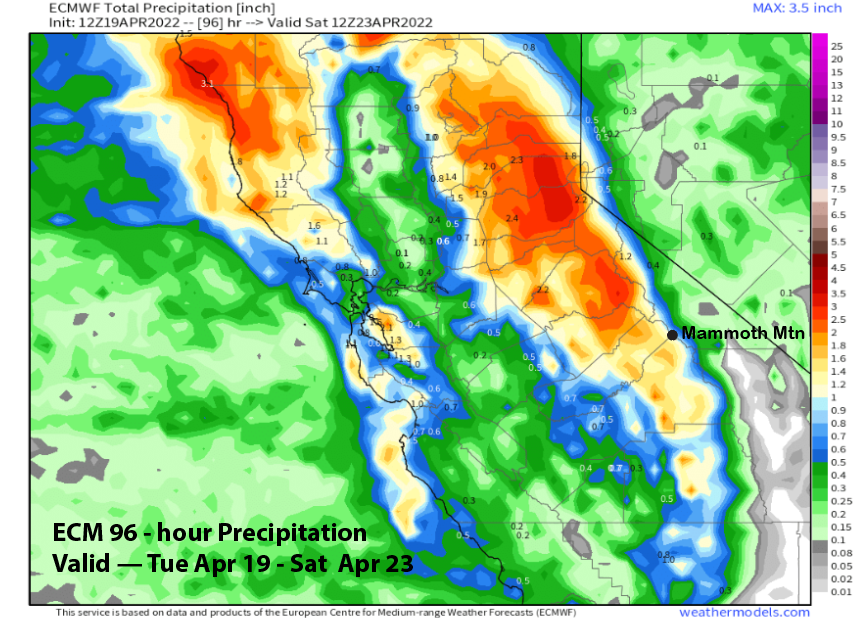 Snow should start Thursday morning with the heaviest snowfall during the early evening and overnight hours. Snow levels will start out around 7000 feet Thursday during the day before lowering to 5-5500 feet by Friday morning when most of the snowfall has accumulated. With Canyon/Ch 22 closed, Thursday probably won’t be a good storm riding day as strong winds will produce a lot of lift holds.  Winds will be much lighter on Friday with all the new powder.

This will be the wetter type of snowfall and not fluff and more good base snow for spring skiing, especially for the top areas where the stripping from the numerous avalanches in December never filled back in during the dry January to March period.

Saturday will be a bluebird morning and temperatures should remain cold through the day for winter-like conditions, especially up top.  Conditions should be epic for the latter part of April.

The longer-range guidance says there will likely not be any more big storms this month (and likely season), but still additional chances for spring storms are possible.  Powder conditions might not happen, but an inch or two of snowfall could help April end up being the second biggest snowfall month after December if the forecast above doesn’t pan out.  It is already weird that the two fringe months of October (32”) and April (20.5” so far) ended up having the 2nd and 3rd largest snowfall totals for the season.

High pressure (image below) will build into the region Sunday and Monday with spring conditions likely returning for most of the mountain by Monday except for maybe the very top.

The ECM model then moves a couple short-wave trough through NorCal next Tuesday (image below) and next Thursday (two images below) that are too far north for any precipitation southward to Mammoth. It would just mean cooler temperatures and gusty winds.  The GFS ensemble also shows a tough mid-week (three images below) and that lend confidence to the forecast.

The GFS ensemble mean keeps a longwave trough situated along the West Coast and into CA in the extended time frame through early May (images below). The ECM ensemble is not as bullish on the troughing. The GFS ensemble solution would only produce breezy/gusty winds and seasonably cool temps as the trough is too far north and/or too weak.  This set-up is a more typical one for this time of year as opposed to the storm for this week that is unusually strong.

While there could be a surprise spring storm, the forecast favors continued dry weather and just seasonable or seasonably cool temps and breezy/gusty winds at times for the rest of April and into early May.  If you want powder, you better get here by the end of this week as it might be last call.  WG