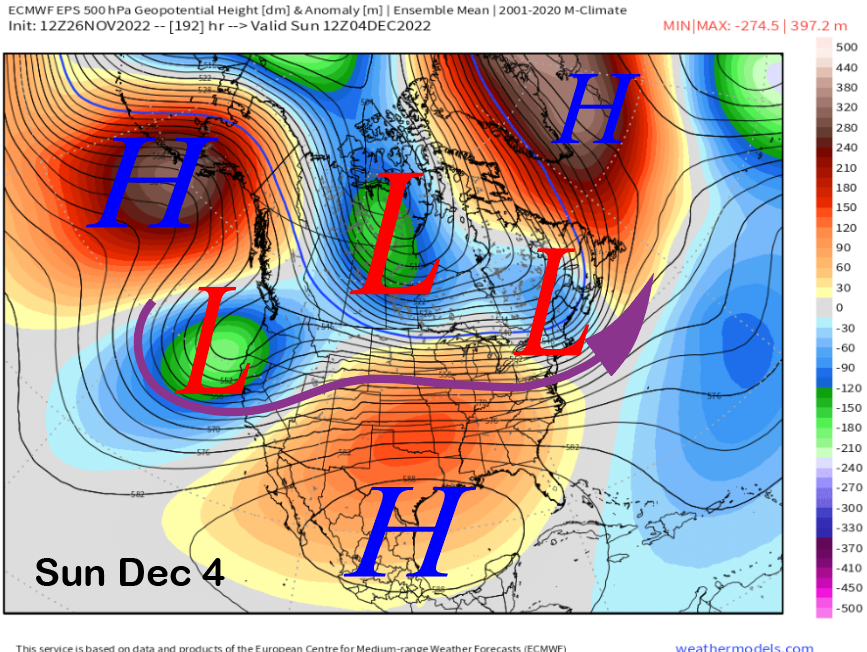 Sun 11/27 through Wed 11/30 – No snowfall expected all days except for flurries or light snow showers Monday afternoon and night, no accumulation expected.

The current infrared satellite image (below) shows passing high clouds passing through the Sierra today associated with the passage of a weak short-wave trough.  High pressure will build back into CA in the wake of its passage tonight and tomorrow for continued dry weather this weekend.

The advertised trough passage for early next week has now turned into an inside slider type weather system instead (image below), as the models were struggling in the last post with how far west the trough would be when it moved southward into CA.  The GFS model was the farthest west and overall had the worse prediction, but none of the models correctly captured it.

Thus, there could be some flurries or light snow showers Monday afternoon and night during its passage with the main effect just being colder temperatures and gusty winds during the day Monday that could result in lift holds.  Dry weather will then continue Tuesday and Wednesday before more beneficial changes in the weather pattern starts later next week.

The longer-range guidance has trended more favorable for powder days by the end of next week and beyond, although there is still quite a lot of uncertainty with the details about how it will play out.

The ECM (image below) and other models move an upper-level trough southward off the West Coast toward the middle part of next week and this time are favoring better over water trajectory before landfall.  The ECM model moves the first trough into the northern areas Thursday while developing a low off the coast on Friday (two images below).

The GFS model is different and it moves the first trough farther southward by Friday (image below) and keeps the other low off the coast through the end of the week.

That difference means both models are showing different amounts and timing for any potential snowfall for the end of the week.  The GFS model is faster and develops snowfall on Thursday, but amounts are only about an inch liquid (image below) or maybe a foot. 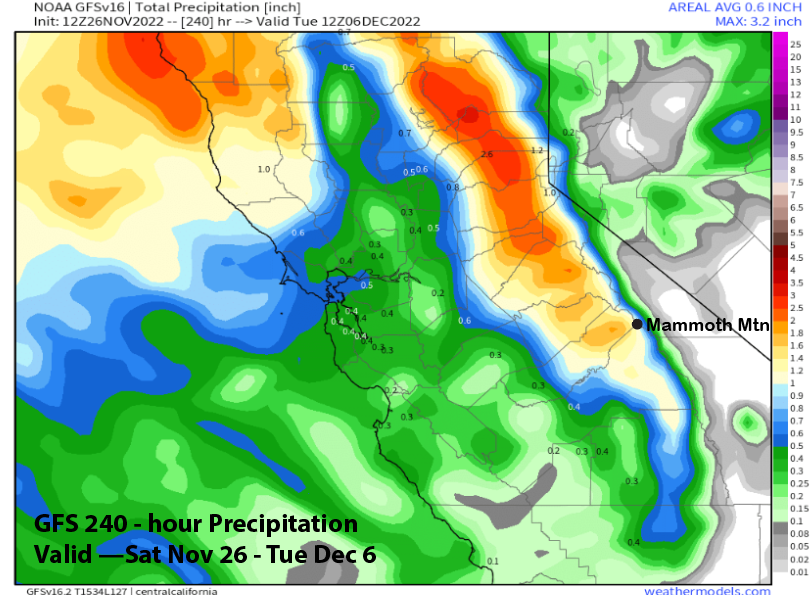 The ECM model is slower and doesn’t start any snowfall until about 24 hours later, but amounts are much larger than the GFS with QPF at around 3” liquid (image below) or over 2 feet of snowfall at Main Lodge. 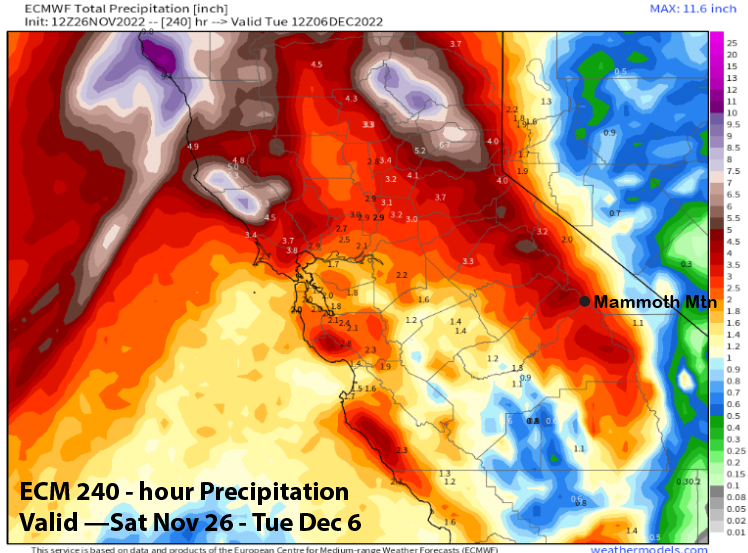 Both models then move the upper-level long-wave trough inland over the weekend (image below) for another round of moderate to heavy snowfall.

The difference is also highlighted by the ensemble means of both models with the ECM model (image below) having the long-wave trough farther off the coast in addition to stronger southwest flow that would advect moisture into any develop storm systems. Many ECM EPS ensembles are also showing an Atmospheric River of varying strengths associated with the trough. 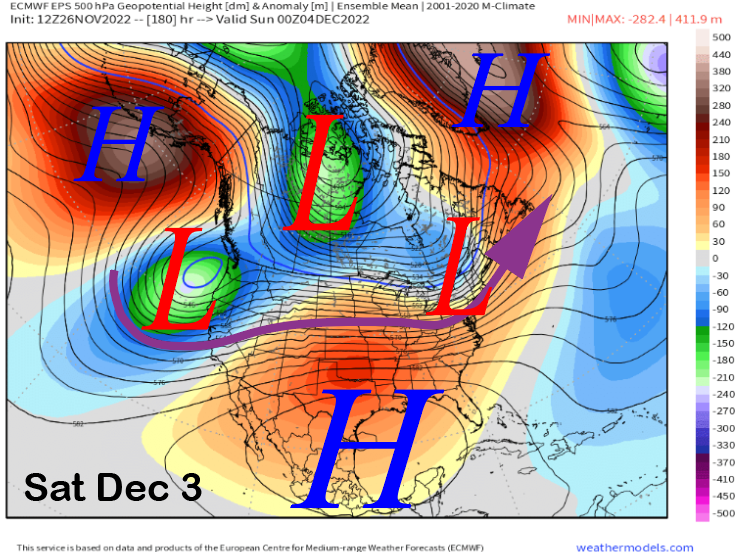 The GFS ensemble on the other hand, keeps the long-wave trough closer (image below) to the coast and is not favoring much southwest flow at all and only a few ensembles are showing a potential AR event.  Thankfully, the GFS ensemble mean is wetter than the operational run (image below-right) over the 10-day period, but not as wet as the ECM EPS that has around 5” liquid for Mammoth (image below-left).

Overall, snowfall is likely by the end of next week and it should be enough for powder conditions.  Timing of that first powder day is still questionable as is the potential amounts, type of snowfall (e.g. Sierra cement), and wind speeds.  Current forecast leans towards a blend of the two ensemble means.  Check back Tuesday and the forecast should be much clearer.

Fantasy range guidance is suggesting a break early over the following week, then keeps the storm track active again into CA by the middle and latter part of that week (GEFS below) for additional chances of snowfall and powder days.

The ECM EPS is favoring hefty amounts (image below) at around 6” liquid for the 15-day forecast period.  That would equate to 4 plus feet for Main if it verifies.  Looks like good times ahead.  WG 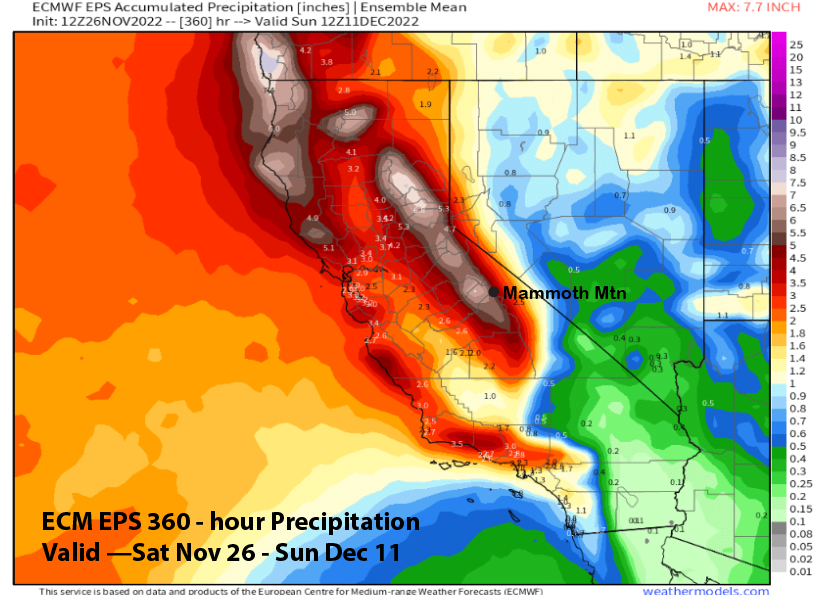