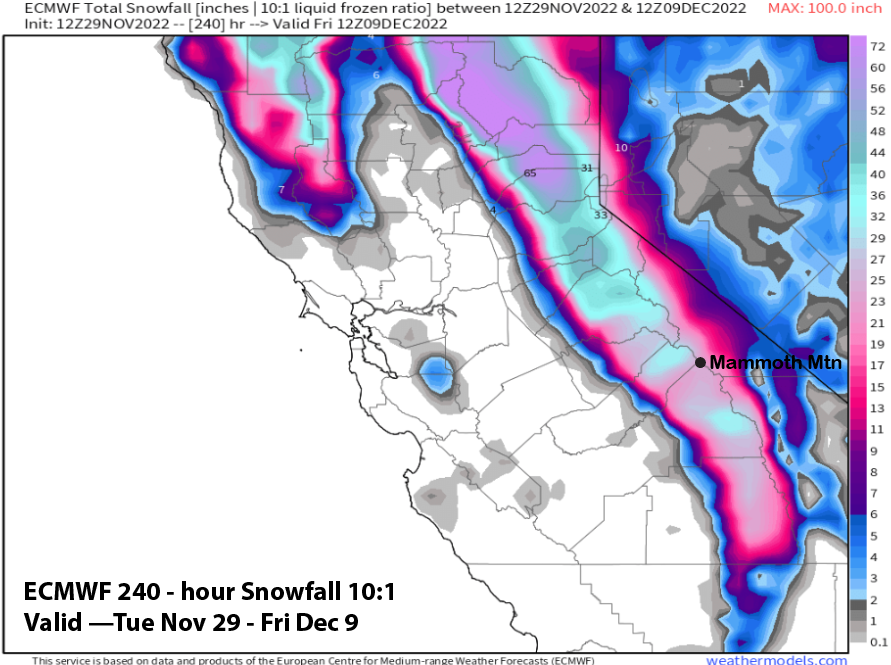 Thu 12/1 – Snowfall develops during the morning and becomes heavy by the late afternoon and evening hours along with strong winds.  Snowfall ends overnight. Accumulations 20 – 25” by Friday AM, ~30” up top.

Sat 12/3 – No snowfall expected during the day followed by a chance for snowfall again by dawn Sunday. Accumulations 0 – 2” by Sunday AM.

The current infrared satellite image (below) shows high pressure over the state today in the wake of the passage of the trough yesterday that produced some wind, colder temperatures, and flurries. High pressure will hold over the area tomorrow for one more dry day before changes in the weather pattern start Thursday as the weather system just entering the PacNW moves southward into CA.

Models are now in agreement that a strong upper-level trough will move into CA on Thursday (image below) before exiting the state rather quickly by Friday.  It will be backed by a strong polar jet stream (blue line) and the southern branch of the jet stream (purple arrow) will pull in Pacific moisture as it moves into Central California, but not an Atmospheric River as suggested by some model runs in the last update. 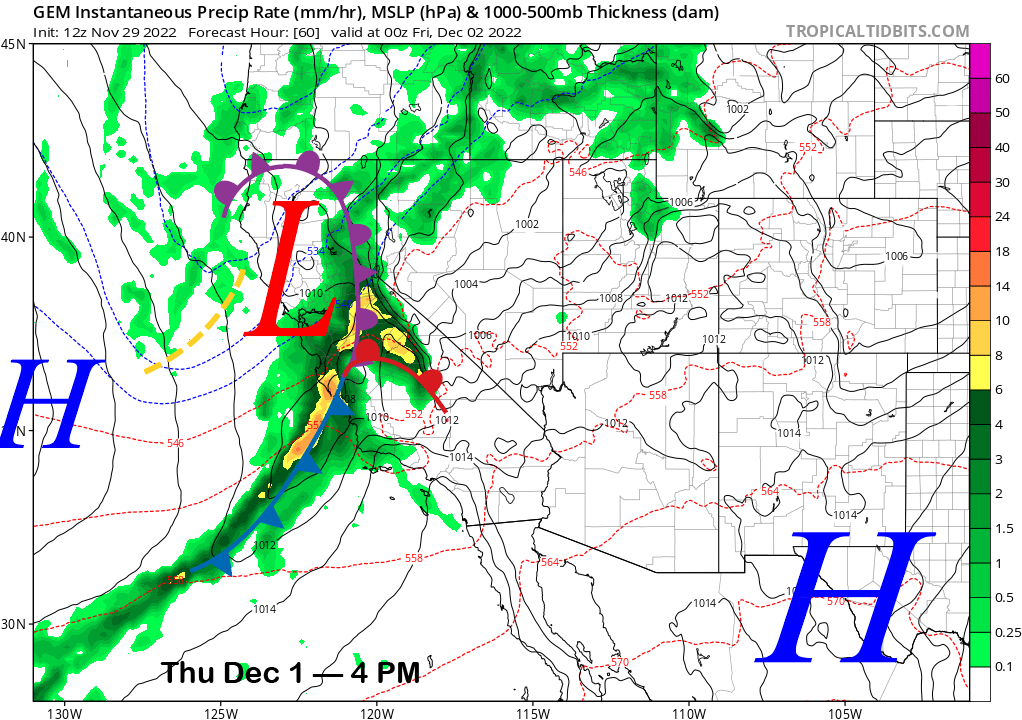 The QPF (Quantitative Precipitation Forecast) from the model guidance is mostly in the 2-3” range with both the ECM (image below) and GFS (two images below) fairly similar. The Canadian model is showing the most at around 3” liquid. 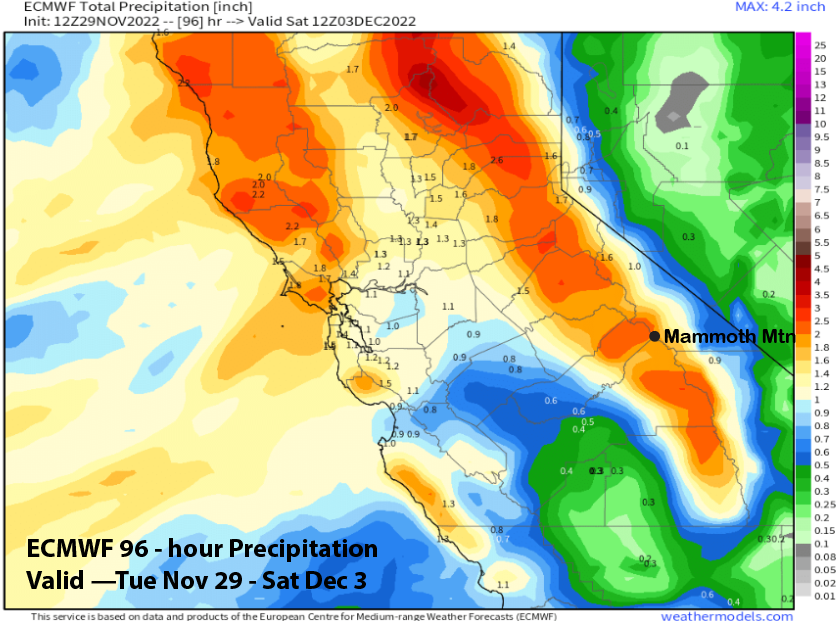 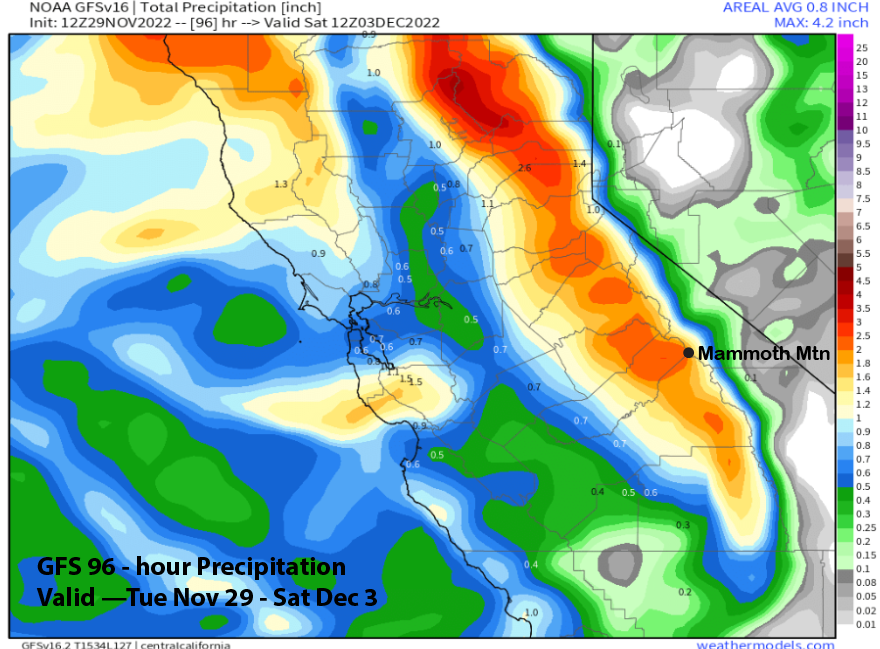 Snow levels will be around 5500 feet when the bulk of the snowfall occurs before lowering to near 4000 feet as it is ending.  Strong winds over 100 mph should be expected in the upper parts of the mountain and those strong winds may lead to fracturing of the dendrite snow crystals during growth. Thus, it won’t be a light powdery snow type and should be rather typical Mammoth snowfall (not total cement either).

Overall, it looks like around 2 feet of snowfall for Mammoth and possibly up to 30” up top.  There will probably be enough snowfall by Thursday afternoon for fresh turns followed by a mountain-wide powder day on Friday.

A short-wave ridge will build into the state in the wake of the storm on Friday and it will probably be a bluebird powder morning when lifts open.  The dry weather is then expected to continue through most of Saturday.

The longer-range guidance is favoring an active pattern to continue over the weekend before there could be a break early next week.  Then the pattern could get active again toward the end of next week.

The ECM model (image below) and others move another upper-level trough southward into CA by Sunday with snowfall possible in Mammoth as early as Saturday night.  The guidance moves the trough out of the state on Monday with a trailing upstream short-wave remaining across NorCal early next week (two images below).

The guidance is not favoring a strong storm this time with the front fairly weak and jet dynamics minimal.  Nonetheless, snowfall should start by Sunday morning with Sunday possibly another storm riding day.  Model QPF is not too impressive with both the GFS (image below) and ECM (two images below) showing amounts around 0.50” liquid.  That is on the low side compared to the ECM mean that is showing about an inch liquid. Thus, snowfall amounts should be in the 6” range or higher. 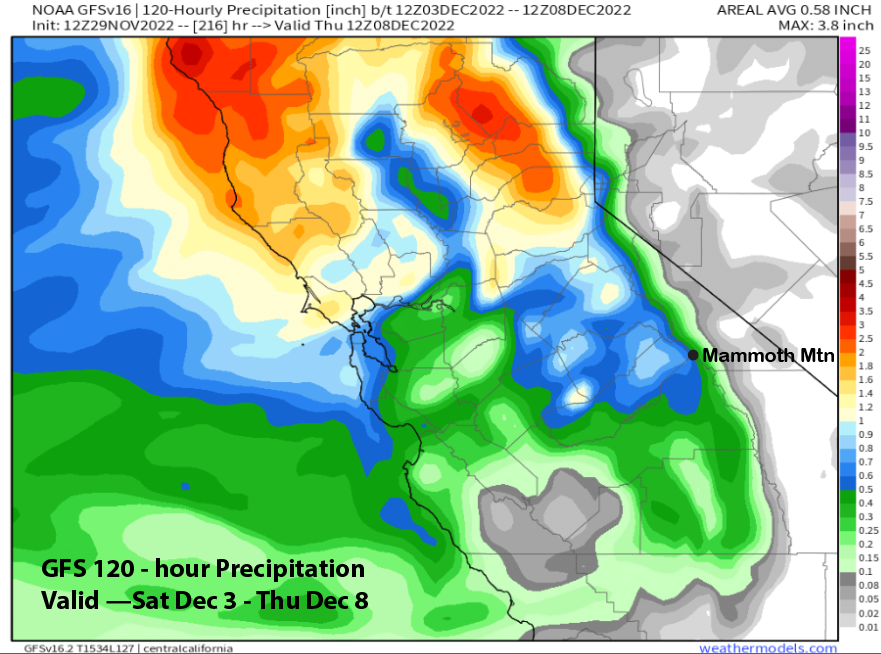 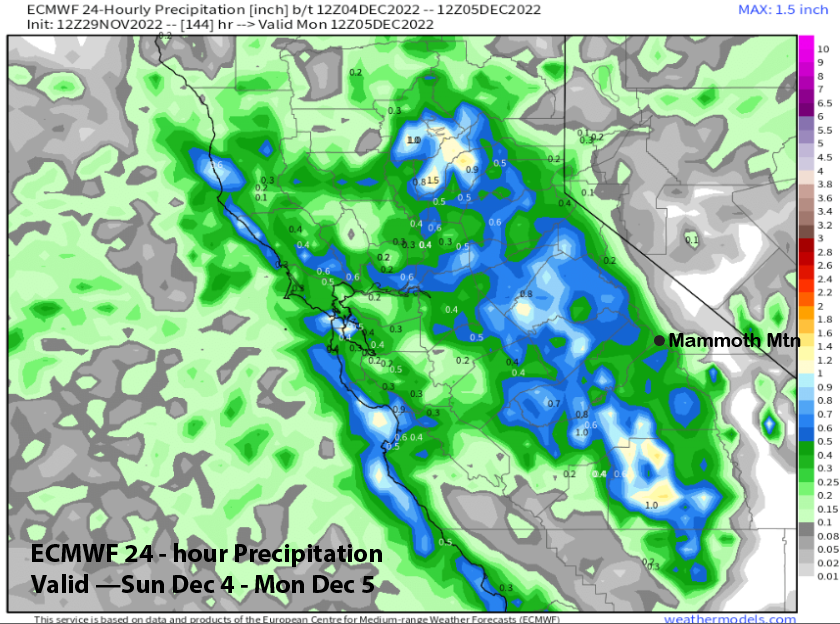 Longer range model forecast then show a chance for another storm toward the end of next week (image below), although the GFS model is slower and delayed by a day or two.  That solution is only weakly supported by the ensembles, so we will have to keep our fingers crossed for good luck.

The fantasy range guidance is not in agreement with the longer-range forecast heading into mid-month.  The GFS ensemble (image below) is showing longwave troughing redeveloping along the West Coast and into CA while the ECM EPS is showing ridging (two images below). The former would mean more storms while the latter would produce dry weather. 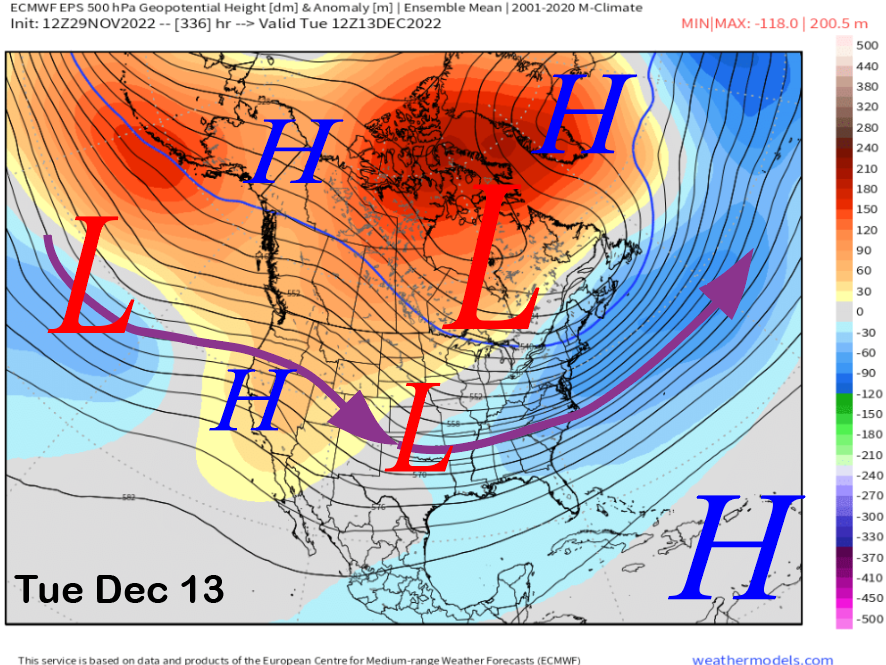 Hopefully the 12z run of the GFS will verify as it is showing more than 6” liquid for the 2-week period including another active pattern mid-month.  We had a big December last year followed by a record dry January through March period.  Hopefully we can repeat the big December and not the record dry part.  WG 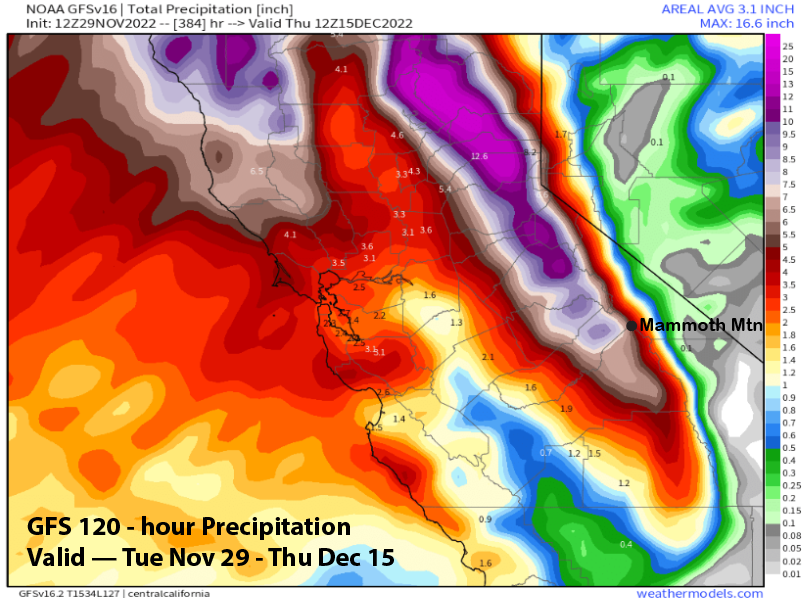