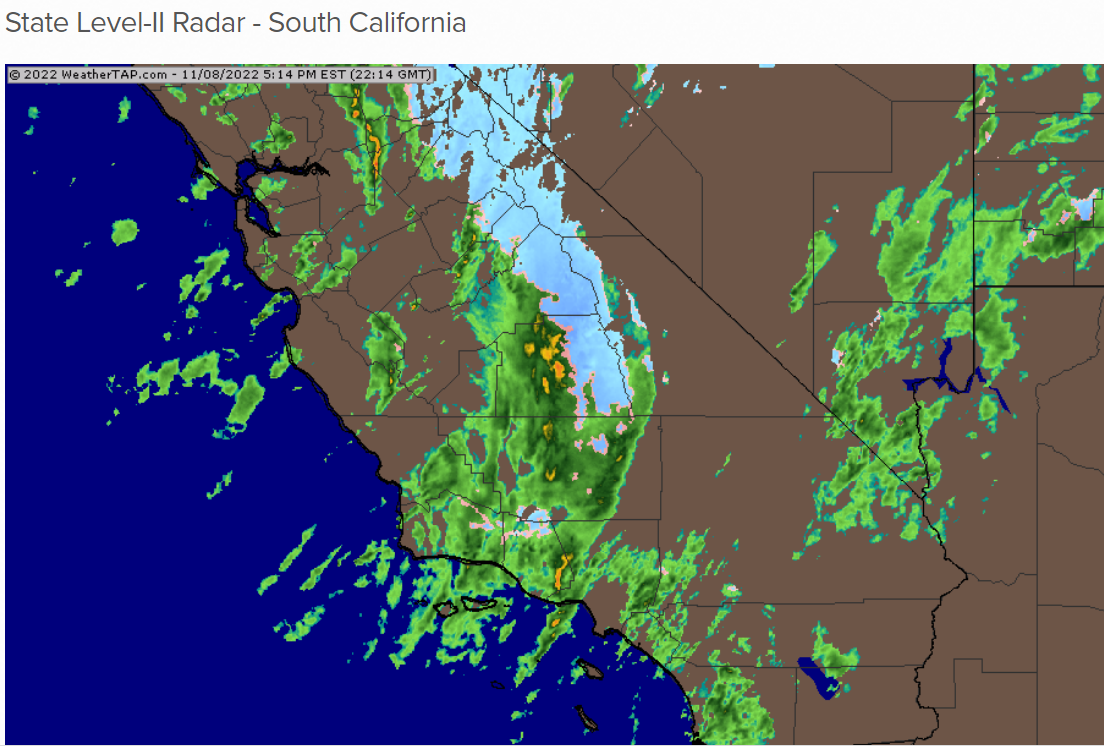 Wed 11/10 through Sat 11/13 – Chance for lingering light snow showers or flurries during the day, primarily during the morning, then dry weather returns by sunset. Maybe an inch accumulation.

Thu 11/10 through Sat 11/12 – No snowfall expected all days except for a slight chance for light snowfall overnight Saturday.

The current infrared satellite image (below) shows a potent early season storm system moving through California with the cold front draped across the southern San Joaquin Valley (image below). The latest radar (two images below) shows heavy snowfall over the Sierra and many social media pictures released today by the mountain showed nearly white-out conditions.

Open cell cumulus clouds or bands of showers are moving into the state behind the front that will keep showers ongoing through tonight.  The ECM model moves the upper-level low out of the state tomorrow morning (image below) and snowfall is expected to decrease during the morning and end during the afternoon.

The 12Z ECM model is forecasting about 2” more inches of liquid precipitation (image below) while the GFS and Canadian models are showing a bit more.  About 1.25” has fallen today (and 9” of snow) and the forecast is calling for about another 1.25” of liquid adding up to another 10-12” of snowfall as snow ratios should improve tonight under lowering snow levels. 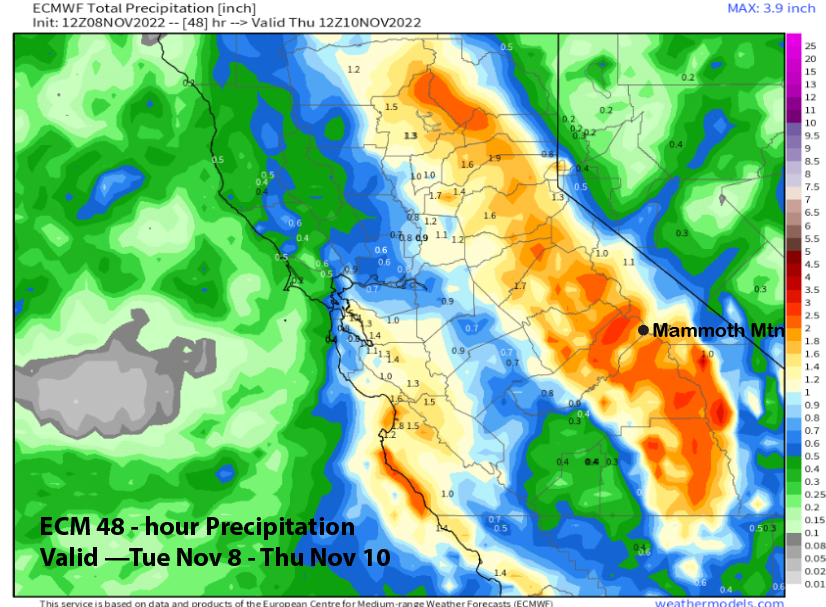 So it looks like the totals will end up around 3 plus feet for Main and possibly around 4 feet in the powder fields.  Overall, a very good early season storm and maybe the best early season storm since October 2004 since snow levels also stayed relatively low for this time of year.

The longer-range guidance is showing more typical fall weather for the weekend and next week with no clear signs of the next storm chance or powder day now that there is a snow base.

The ECM model (image below) does move a weak short wave into CA on Saturday and Sunday and produces some light snowfall for Mammoth. However, the GFS (two images below) and other models are not showing a similar solution, depicting a much weaker or non-descript short-wave trough instead.  If any snow does fall, it will likely be light and not enough for powder conditions.

High pressure (image below) is then favored to build over the state by the middle part of next week and likely last through the following weekend for a stretch of fair and dry weather.

The fantasy range guidance or long-range ensemble mean 500-mb height forecasts from the GEFS (image below) and ECMWF EPS (two images below) are remarkably similar for the time period heading into the last week of the month.  Both show a zonal jet into the West Coast and weak troughing southward into CA. 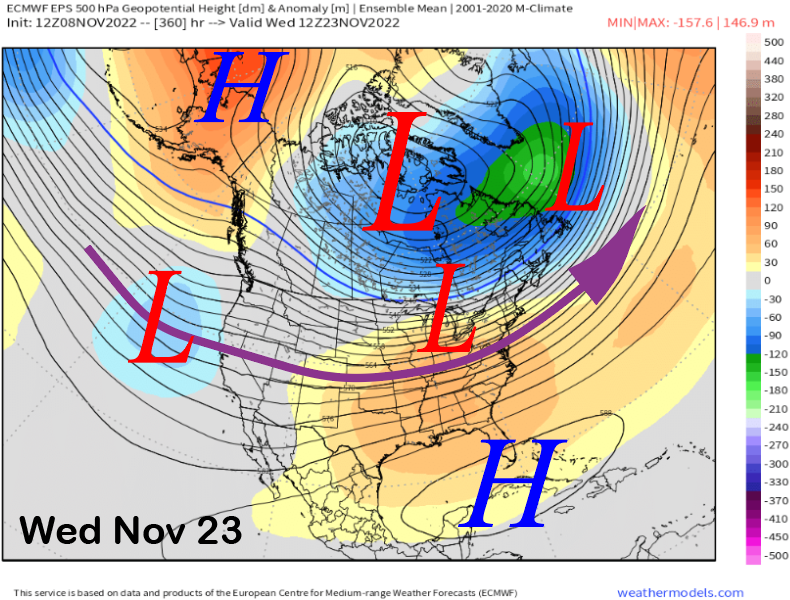 That last week of the month is also when the climate models are forecasting an active pattern again with both the CFS (image below) and EPS-46 day (two images below) showing above normal precipitation occurring across the northern half of CA. 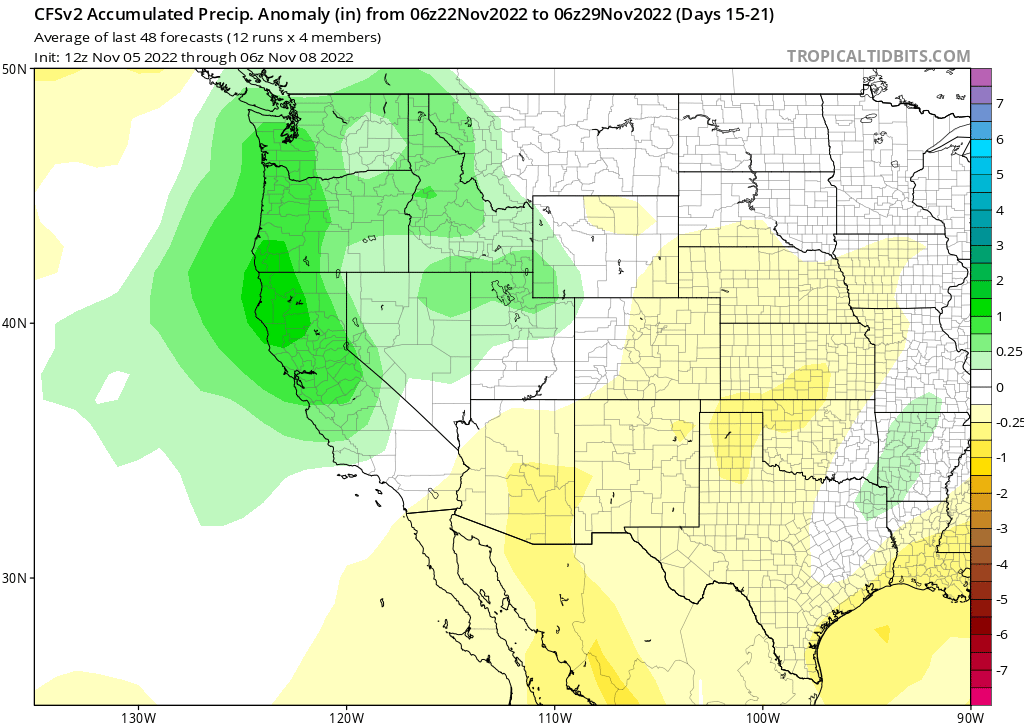 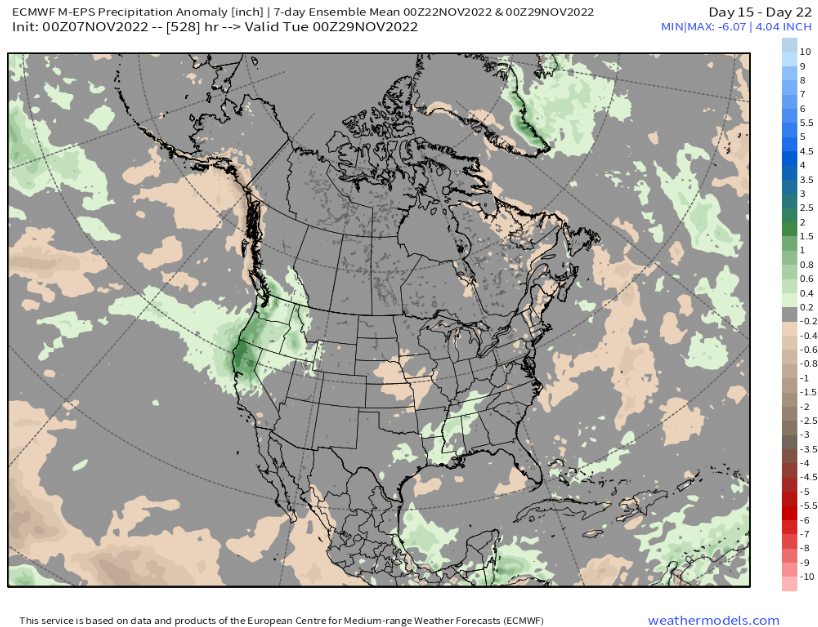 It is a long ways out, but lending some confidence is the MJO moving into phase 7 that can be associated with wet periods in CA in November, especially that last week of the month.

Average November snowfall is 28” and we have already surpassed that amount. Half of the eight 500”+ snowfall seasons in the historical record kept by the mountain started with a big November (50”+).  Of the 11 seasons when November snowfall was at least 50”, only 3 of those seasons failed to see 300”.  Fingers crossed for a big year. WG